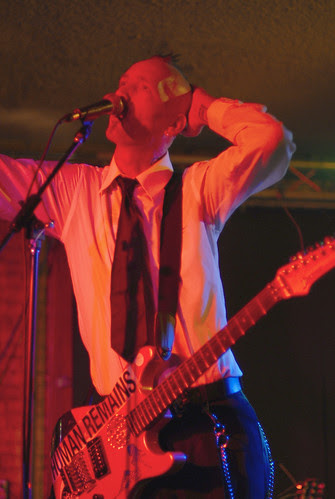 With all the "new" releases of material from The Beatles, and all the documentaries they ran on VH1 and such to "celebrate" this, we're reminded that those boys had a major rowdy streak in them, not just in trying new ideas and taking rock and roll to new ground and heights. But even in their early day, they were rockers who tore up the underground clubs in Hamburg, grabbing the frenzy of Elvis and adding thier British stamp on it. Before Brian Epstein got hold of them and polished them up for mass consumption, before they were considered the pop alternative to the supposedly grittier Rolling Stones, they were leather-clad lads, sweating and smoking and hollering their merseybeat as furiously as any of the Memphis seven did as they banged out hillbilly rock and changed music stateside.

Brian Barney, also known as Lane Klozier, understood this. While some people might have been simply aghast at the concept of his band, The Buggs, all this recent Guitar Hero Beatlemania has reinforced that putting a speedpunk take on beloved Beatles hits was the spiritually correct thing to do. Those songs sounded great in his hands. After a particularly magical night at the BBC almost two years ago I'd written (from the heart):

The Buggs have spoiled me. This punk girl doesn't want to hear these songs 'round a campfire sung by sensitive men who don't trim their beards anymore. I want to hear "Norweigan Wood" played fast and furious. I want to hear Badfinger's "Baby Blue" sung by desperate men who are more pissed than melancholastic about losing their one true love.

Two hours ago, I'd gotten a call from a friend who told me of his sudden passing today. I called around, hoping this was some sort of awful joke, but it's not. Klozier apparently suffered a heart attack and died, at 48. That's too fucking young. Especially for a man who whose heart was destined to stay young, loud and snotty (the best compliment I can give, as those of you who know me will attest) for many more years.

I wasn't tight with him, but I remember meeting him at a party at Chris Lehmann's (who drummed for him in The Buggs) and we hit it off instantly. We had very similar tastes in music, and respected the same sensibilities. We exchanged contact information, I went to see his band, and instantly loved them. I learned that Klozier was also a drummer, and before I knew it, there he was, behind the trapset for the latest incarnation of Guido's Racecar, fitting in perfectly with that band's ravaged punk bluesey burlesque. He viewed my photography and offered support and excellent critique. And one fine day, I saw his praise for my writing, which I have proudly posted at the top of this blog (with his permission). I was touched at his unsolicited words, and was proud that he said something about me that could very well be said about him. He was a great rock and roll writer -- did work for the Shepherd and other publications, but we both agreed that's not going to pay the bills. Not that he was about using his art to pay the bills, but if the $$$ started to roll in, he wasn't going to affect some stupid attitude about it either. And marketed correctly, the Buggs had the potential to bring not only smiles, but some cash. It wasn't to be, but that doesn't detract from some of the most fun shows I saw -- whether an acoustic set (yes, acoustic speed punk covering the Beatles) at Lulu, or just a great cover set at a street festival. And he was a friend of well-played, irreverent but emotionally invested rock and roll, which meant he was a friend of so much that I love.

His passing is a loss for me, a loss for many of my friends who have played with him, and a loss for the SE Wisconsin music community. Rest in peace, Lane. 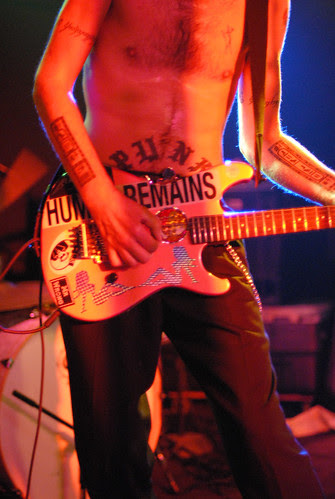 punk remains amongst the buggs, originally uploaded by V'ron.

UPDATE: According to the Shepherd Express, the funeral has been scheduled 2 to 5 p.m. on Saturday, Nov. 21 at the Hartson Funeral Home in Hales Corners, 11111 Janesville Rd.
Email Post
Labels: local music

Anonymous said…
This still is hurting me and us (The Danglers) so much. He was such a great guy! You could be speaking to him one minute about GG Allen and the next about being a father! He supported the scene in Milwaukee with everything he had! AND he had the rock drumming style that some guys wish for! We will all miss him!
Wednesday, November 18, 2009 10:46:00 AM

Anonymous said…
This is terrible and terribly sad news.

Dan Reed said…
Played in the Buggs and one of the Guido's Racecar incarnations with Brian. He was one of my best friends. Thank you for all the kind words, everything you said was the truth, V'ron. God, this hurts so much.
Wednesday, November 18, 2009 6:46:00 PM

Unknown said…
Lovely tribute. Leaves the rest of us pondering what we will do in the event of an untimely death. We are talking about this in our home now. Are we really at the age when we have to plan this? Prayers to his family now. Thanks again, Vee, for this beautiful homage.
Wednesday, November 18, 2009 11:25:00 PM

Anonymous said…
Brian and I go back 25 years and am proud to say I was the original guitarist in the Bugs for six years. But there is much more and not enough space here. We could talk hours about nothing; our own Seinfeld. My best friend. I expect you and Bonham are comparing old Speed King pedals!
Love ya man. James effing Beau
Thursday, November 19, 2009 7:22:00 AM

Anonymous said…
Wonderful tribute. I miss Brian so very much. First Neil and now Brian. James and I are on our own now.

Tarisa said…
Thank you for the lovely tribute to my father. I did want to update all that Saturday's service is the veiewing, but that we'll be holding a more celebratory service, welcoming ALL friends, family, and fans :) at St. Marcus Lutheran Church, on Monday 11/23 at 6:00 pm. 2215 N. Palmer St. Milwaukee

Anonymous said…
Brain has helped us (Fire on Your Sleeve) many times throughout the years and was always a blast to hang out with. He will be missed not only by us and his loved ones, but by the whole Milwaukee music community.
Saturday, November 21, 2009 5:11:00 PM

christine g said…
we were friends since my bartending days at "the jab"~ i am so very sad~ especially because i only learned of this just now~
so moved with brian's talent and passion~ i wrote a verse about him all those years ago as i watched him from the stage~ what was the name of his band back then?~
i will dig out the "holler" cd today and cry my eyes out~
my prayers are with the family~ blessings to baby will~
in peace~
christine g~
Wednesday, March 10, 2010 1:18:00 PM 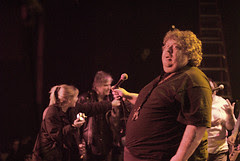